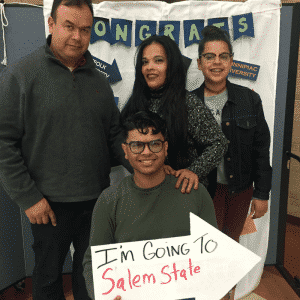 It’s never too early to start planning and saving for college.

Alexandra Contreras had to leave the Dominican Republic for the United States right at the same time that she had intended to go to college. After missing out on that opportunity she and her husband, who is originally from Mexico, were sure to be clear with their son Roger that college would definitely be in his plans for the future. “We had to sacrifice our education thinking about the future of our kids and providing them with things that we didn’t have.” Roger found out about the Inversant program through La Vida Scholars and shared it with his family. The family joined Inversant after realizing the importance of saving as early as possible.

Alexandra and her husband switch off attending workshops and are sure to sit down afterwards and fill each other in on things they may have missed. She shares that, “what I enjoyed the most was the fact that every time they made sure they told us to make this a family affair, to make sure we sit down as a family with our kids and communicate about these things. We had to make decisions as a family.” The family had not started thinking about saving for college before they joined Inversant, they always believed it was too early to start saving and didn’t know when the right time actually was. After attending a few workshops, Alexandra realized that it’s never too early to start saving for college.

Roger is interested in studying Business Administartion and will be attending college in Connecticut. In his free time he enjoys community service and playing baseball. Alexandra hopes that by attending college, Roger will have a much brighter future than hers, with many more opportunities. She tells us that, “If I had known how important it was to [save] sooner I would have done it. I didn’t know how expensive and how much we would have to save. But with this program we were given the opportunity to start. We appreciate the program because they have formed part of my child’s education.” We wish Alexandra and her family the best of luck in the future and we are so proud of all their efforts!