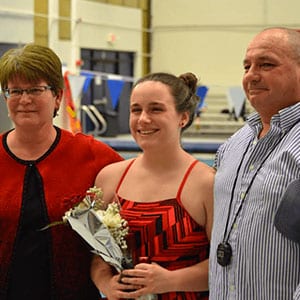 Saving consistently helps to alleviate the stress of college costs.

Cynthia and her daughter, Grace, are Salem natives that were originally drawn to Inversant because college had always been part of the plan for Grace and they wanted to learn more about the entire process. Cynthia shares that, “obviously with Grace being our only daughter, I had not yet experienced the college application process and wanted more educational tidbits.” Before Inversant, the family was able to save for their daughter with a UPromise credit card that deposited a percentage to a savings account every time they used the card. While Cynthia had attended college in the past, she was left with a large amount of debt after graduation. She wants to help her daughter as much as possible to avoid the same result.

Cynthia’s favorite workshop was on loans. It was helpful for her to learn all the differences between subsidized and unsubsidized loans, as well as all the different payment options. Loans are an important subject to the family, Cynthia shared that, “While we did start saving for college when Grace was just a baby, it’s clear that we were unable to save enough in a college savings program for a 4 year public or private college. However, we knew early on that it was important to save something.” Overall, she finds that the monthly workshops are a great opportunity and she hopes that more families begin to take advantage of it.

Grace was recently accepted into Mass Maritime and hopes to one day be the captain of a ship. Her mother says that Grace practically lives on the water in Salem and she is excited to study Marine Transportation. Cynthia’s proudest moment was seeing her daughter grow as a leader and take charge of her own life. She stresses that she hopes other families begin to start saving earlier on, “I think sometimes people think that they have to save a lot instead of saving consistently. I don’t think they understand how money can compound. You shouldn’t wait until the last minute just to start saving. It alleviates stress to start saving early; you shouldn’t base your decisions on money when you can eliminate that part of the decision making by saving early.” We are proud of the effort the Theriault family has put towards saving and we wish Grace the best of luck in college!