Inversant’s Students Persisting In and Completing College at High Rates 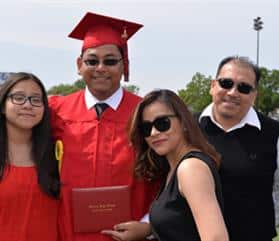 Only 10 percent of youth coming from low-income families obtain a college degree by the age of 24[1]. Comparatively, individuals from high-income families[2] are 8 times more likely to graduate from college by the same age (77%). What’s more, the income gap in college degree attainment is widening; in the 1970s, high-income youth wereonly 6 times more likely to graduate college than low-income ones.

To reverse this trend, Inversant believes in the power of parental engagement and investment in children’s education. Inversant’s program engages parents with professionally developed workshops delivering college-focused financial education, while it motivates them to save for college by providing savings matches and other incentives. There is growing evidence indicating that saving for children’s education can significantly increase low-income students’ likelihood of obtaining a college degree[3] and our experience at Inversant supports this.

Inversant’s students also have high persistence rates. 90% of our alumni were back for their second year of college. Again, this is much higher than the national average of 68.7%[7] and even higher than the rates for student from the Boston Public Schools (BPS) (66%)[8], which is more representative of the population we serve. In addition, 85% of Inversant’s students returned after their second year, compared to 50% of BPS students.

We are proud of Inversant’s families and their children! Congratulations to them for their hard work saving and preparing for college, and most importantly for persisting in college and getting their degrees!

[1] Low-income families are defined having income lower than $34,000 http://www.pellinstitute.org/downloads/publications Indicators_of_Higher_Education_Equity_in_the_US_45_Year_Trend_Report.pdf

[5] We have not enough years to calculate the more commonly used six-year graduate rate since our first cohort started college in 2010.